Almost three years have passed since the enactment of the American Recovery and Reinvestment Act of 2009 (ARRA). Back in November 2009, we reported in a blog post that actual spending in fiscal year 2009 of funds provided by ARRA was about 1 percent higher than CBO’s estimate for that year. How did ARRA spending turn out over the 2009–2011 period (that is, from February 2009 through September 2011), and how do those results compare with CBO's original estimates? 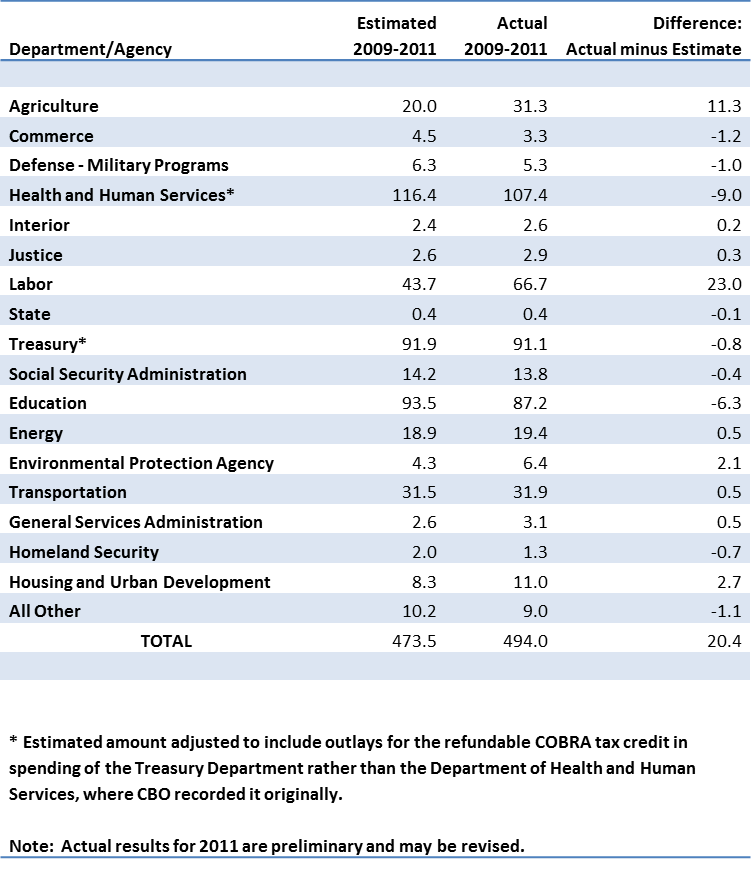 ARRA provided funding for a broad array of spending initiatives that, combined with tax cuts, were intended to provide economic stimulus. In February 2009, CBO and the staff of the Joint Committee on Taxation (JCT) estimated that enacting ARRA would increase federal deficits—through the combination of spending increases and revenue reductions—by a total of $787 billion over the 2009-2019 period.

CBO continues to update that estimate for new information. Our most recent estimate, published in the January 2011 Budget and Economic Outlook, put the cumulative impact of ARRA at $821 billion over the 2009-2019 period, reflecting $637 billion in spending increases and $184 billion in revenue reductions.

The analysis presented here addresses only the spending components of ARRA; for the most part, the actual revenue effects cannot be readily identified because they are implicit in the government’s total revenues and do not appear separately in the budget.

The largest components of the new funding under ARRA included temporary authority for assistance to states through increases in the federal matching rate for Medicaid spending and for education-related expenses, payments to individuals in the form of refundable tax credits, increased funding for unemployment compensation, and increased funding for transportation and other infrastructure projects. To see a detailed list of the spending components of ARRA, see CBO’s original cost estimate for the legislation at the time of its enactment.

The spending resulting from ARRA was greater than estimated because of two developments on the economic front: Unemployment was greater and food prices were lower than CBO anticipated at the time.

Spending on unemployment-related benefits provided by the Department of Labor was higher because more people were unemployed than CBO originally projected, and because, after losing their jobs, many workers remained unemployed much longer than at any other time in recent history; those longer durations meant that people collected more benefits.

ARRA spending by the Department of Agriculture also significantly exceeded the original estimates. Almost all of that difference occurred in the Supplemental Nutrition and Assistance Program (SNAP, formerly called Food Stamps) and resulted mostly from smaller-than-expected increases in food prices. ARRA temporarily raised the maximum benefit in 2009 and required that it stay at that higher level until routine inflation adjustments that would have otherwise been applied to the benefit exceeded that level. (Subsequent legislation eliminated that increase after October 31, 2013.) In 2010 and 2011, food prices rose less than we had expected at the time ARRA was under consideration; thus, there was a larger difference than anticipated between the maximum benefit amount set by ARRA and what that amount would have been based on the routine inflation adjustments reflecting actual prices. Consequently, the additional expenditures resulting from the higher maximum benefit set by ARRA were greater than CBO had estimated.

Most of the other differences between projected and actual spending are modest and in many cases indicate slower spending than originally estimated, particularly for programs of the Departments of Health and Human Services and Education. In total, spending from ARRA other than that by the Departments of Labor and Agriculture was $14 billion less than CBO projected.

The $20 billion net difference somewhat overstates the variance between CBO’s estimates and the actual outcomes over the 2009–2011 period. CBO’s estimates took into account an anticipated slowdown in regular (non-ARRA) spending, particular for transportation and education programs, resulting from the availability of ARRA funds. Although some slowdown in such spending clearly occurred, there is no way to identify for sure how big that effect was.

Through September 2011, 78 percent of the expected total spending through 2019 has been recorded. As CBO expected, spending started relatively slowly in fiscal year 2009, with $114 billion in outlays stemming from ARRA that year. The peak effect of the legislation was in 2010, when outlays totaled $235 billion; about $145 billion was spent in 2011.

ARRA spending began to wane in late 2010. The slowdown continued during 2011, as the law's assistance to states through the Medicaid program ended and as assistance in the form of unemployment compensation and refundable tax credits declined. (Subsequent legislation extended some benefits to the unemployed and aid to states for Medicaid, but it also limited the duration of benefit increases in SNAP; the effects of such changes are not included in this analysis.)