The federal government’s fiscal year 2011 has come to a close, and CBO estimates, in its latest Monthly Budget Review that the federal budget deficit for the year was about $1.30 trillion, approximately the same dollar amount as the shortfall recorded in 2010. The 2011 deficit was equal to 8.6 percent of gross domestic product, CBO estimates, down from 8.9 percent in 2010 and 10.0 percent in 2009, but greater than in any other year since 1945. CBO’s deficit estimate is based on data from the Daily Treasury Statements; the Treasury Department will report the actual deficit for fiscal year 2011 later this month. 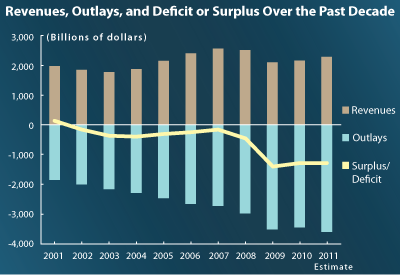 The estimated deficit is slightly above what CBO projected in its August Budget and Economic Outlook mostly because revenues were a bit lower than expected.

Although the 2011 deficit was about the same as the 2010 deficit, that comparison is complicated by several factors, particularly these:

Receipts in 2011 totaled $2.3 trillion. Although less than the sums collected from 2006 to 2008 (revenues reached $2.6 trillion in 2008), that amount was $141 billion (or 7 percent) more than what was collected in 2010. That growth reflects a significant increase in receipts from individual income taxes, which was partially offset by a reduction in other receipts. Specifically:

Outlays—which totaled $3.6 trillion—ended the year 4.2 percent (or $144 billion) above 2010 amounts, CBO estimates, well above amounts recorded before 2009. (Outlays in 2008, for example, were $3.0 trillion.) After adjusting for the effects of timing shifts, the increase from 2010 to 2011 was 1.8 percent. Excluding adjustments recorded in the budget for the estimated cost of credit programs (mainly the Troubled Asset Relief Program), the government’s other outlays increased by less than one-half of one percent relative to spending in 2010.

Net interest on the public debt grew the most, rising by almost 17 percent ($38 billion) above the outlays recorded in 2010, primarily because of the large increase in the government’s debt during the past year. Defense spending increased by about 1 percent in 2011, after rising by an average of 7 percent per year over the 2006–2010 period. Medicaid outlays increased by just 1 percent in 2011, in part because the federal government’s share of the program’s costs declined, as previously legislated increases in that share expired. (In contrast, Medicaid spending grew by almost 9 percent in 2010.) Medicare and Social Security outlays rose by about 4 percent each in 2011, slightly less than they rose in 2010.

In the other direction, spending for unemployment benefits fell by 24 percent ($39 billion) in 2011 because fewer claims were filed and, to a lesser extent, because a provision that boosted recipients’ benefits by $25 per week expired. Net payments to Fannie Mae and Freddie Mac also fell, from $40 billion in 2010 to $5 billion in 2011. Spending for education, commerce, housing, and space programs declined as well.