All years referred to are federal fiscal years, which run from October 1 to September 30 and are designated by the calendar year in which they end. Numbers in the text and tables may not add up to totals because of rounding.

The federal government’s fiscal transactions are recorded in two major sets of accounts: The Budget of the United States Government (often called the federal budget), which is prepared by the Office of Management and Budget, and the national income and product accounts (NIPAs), which are produced by the Department of Commerce’s Bureau of Economic Analysis (BEA).1 The federal budget is the framework generally used by executive branch agencies and the Congress; it is also the presentation of budgetary activity that is most often discussed in the press. The NIPAs, by contrast, are not intended to help the government plan or manage its activities. Instead, those accounts provide a general framework for describing the entire U.S. economy and show how the federal government fits into that framework.2

Each year, the Congressional Budget Office publishes projections of federal revenues and outlays for the current fiscal year and the next 10 years. Those baseline budget projections reflect the standard structure for budgetary accounting. This report presents CBO’s revenue and outlay projections for 2022 to 2032 translated to the receipts and expenditures used in the NIPA framework (see Table 1).3 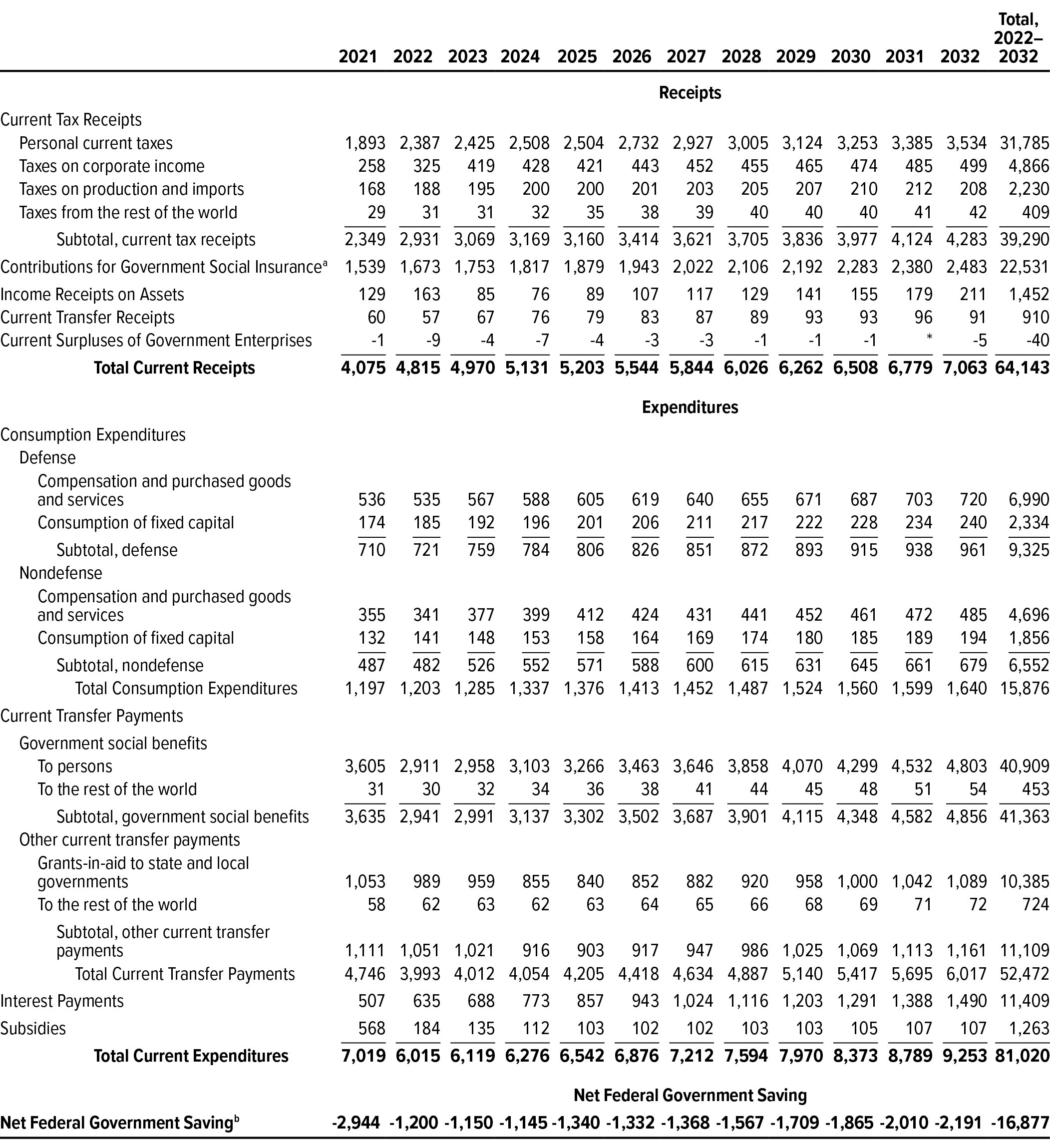 In CBO’s baseline projections, spending related to the Infrastructure Investment and Jobs Act (IIJA, Public Law 117-58) exceeds amounts specified in that law. As a result, the NIPA expenditures over the 2022–2032 period shown in this table are $0.4 trillion more than they would be if CBO’s baseline reflected only the advance appropriations specified in the IIJA. For more information about the treatment of IIJA spending in CBO’s baseline, see Congressional Budget Office, The Budget and Economic Outlook: 2022 to 2032 (May 2022), Chapter 3, www.cbo.gov/publication/57950.

Because of conceptual differences between the two sets of accounts, for the 2022–2032 period cumulative current receipts in the NIPAs exceed projected revenues in CBO’s baseline by about 5 percent, and current expenditures in the NIPAs exceed projected outlays in the baseline by about 4 percent. Negative net federal government saving (that is, current receipts minus current expenditures) is projected to shrink from $1.2 trillion in 2022 to $1.1 trillion in 2024 but then increase steadily, reaching $2.2 trillion in 2032. The deficits in CBO’s baseline budget projections are similar: They hover around $1.0 trillion in 2022 and 2023, before increasing to $2.3 trillion by 2032. Over the 2022–2032 period, negative net federal government saving, which totals $16.9 trillion, is projected to slightly exceed deficits, which total $16.8 trillion.

The budget of the federal government is best understood as an information and management tool that policymakers use to allocate the government’s resources.4 Its main objectives are to assist in policy deliberations, facilitate the management and control of federal activities, and help the Treasury manage cash balances and determine borrowing needs. In most cases, cash accounting is used to report items in the federal budget—that is, outlays and revenues are recorded when payments are made and receipts are collected. The budget follows the federal fiscal year, which runs from October 1 to September 30.

In some cases, lawmakers have decided that different accounting approaches would provide better measures of costs than cash-based accounting. For credit programs in particular, cash-based accounting is ill-suited: Tracking only the annual cash flows of federal direct loans or loan guarantees would give a misleading view of the true costs or savings associated with those transactions. To address that problem, the budget records the estimated net costs or savings over the lifetime of loans and loan guarantees as outlays at the time of origination.5 Such estimates are subject to revision over time in response to unexpected changes in interest rates or other factors.

The National Income and Product Accounts

The NIPAs are not intended to help the government plan or manage its activities. Instead, they provide a general framework that describes the entire U.S. economy and show how the federal government fits within that framework. The NIPAs track current economywide production and the resulting income for specific periods, and they report the major sources of production and the recipients of the income. They measure the federal government’s activities over calendar years and calendar quarters, but totals for fiscal years can be derived from the quarterly estimates.

In the context of the NIPAs, the federal government is both a producer and a consumer. Its workforce uses purchased goods and services and government-owned capital (that is, structures, equipment, software, and research and development) to provide services (such as national defense) to the public. Because those services are consumed by the public, they are, by convention, regarded in the NIPAs as federal consumption expenditures.6 The federal government also affects the resources available to the private sector through taxes and transfers. All those activities are recorded in a way that is consistent with the NIPAs’ treatment of other sectors of the economy.

All three categories can cause totals for receipts and expenditures in the NIPAs to differ from totals for revenues and outlays in the budget. 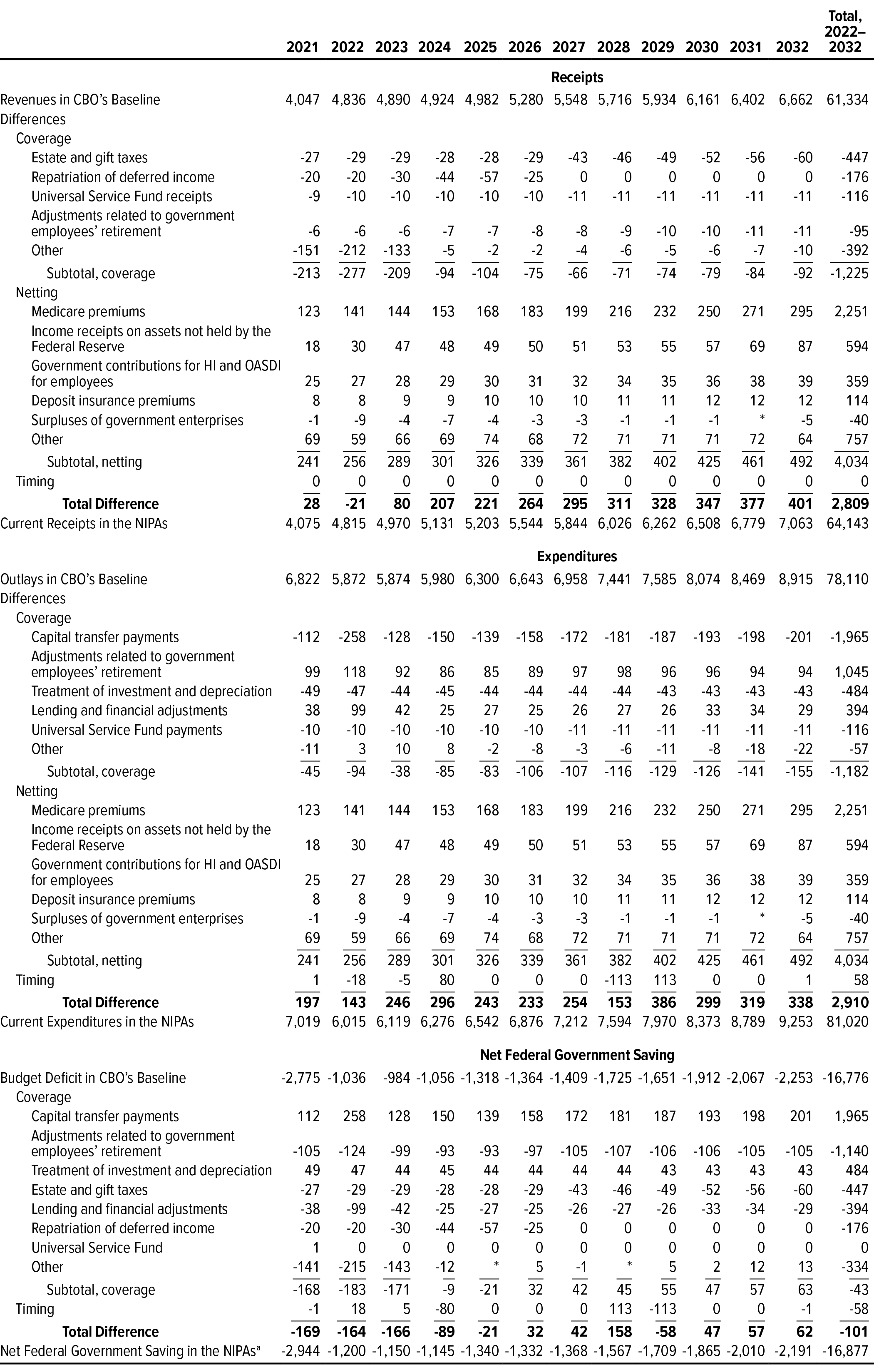 Treatment of Capital Transfer Payments. The largest difference in coverage, amounting to $2.0 trillion over the period, is from expenditures for capital transfers. Capital transfers are transfers of an asset—or cash to purchase an asset—from one economic entity to another, such as grants from the federal government to state and local governments for the construction of highways. Those transfers are not directly associated with current production, so they do not affect the NIPA measure of current expenditures. As a result, outlays in CBO’s baseline related to the purchase of assets increase deficits in the federal budget but do not affect net federal government saving in the NIPAs.

Around 40 percent of expenditures related to capital transfers in CBO’s translation of its baseline budget projections to the NIPA framework stems from the Infrastructure Investment and Jobs Act (IIJA, Public Law 117-58), which was enacted in November 2021. In addition to authorizing and reauthorizing several new and existing programs, that law provided discretionary funding to implement some of those programs. A significant portion of that discretionary funding is for highway transportation programs and for broadband deployment that are undertaken by state and local governments. In the NIPAs, spending on those programs and activities is generally classified as capital transfers.

Treatment of Federal Pension Plans. The second largest difference in coverage stems from the treatment of federal pension plans in the NIPAs (shown in Table 2 as “Adjustments related to government employees’ retirement”). That treatment differs from the budget’s treatment in several ways:

Investment and Depreciation. Investment spending in the federal budget (that is, the purchase of new capital) is not counted as a current expenditure in the NIPAs because new purchases of federal capital do not measure the current capital inputs used to produce government services. To approximate the cost of those capital inputs, the federal expenditures in the NIPAs include an estimate of the depreciation (or consumption) of the government’s stock of fixed capital—an amount not reflected in the federal budget. On net, those differences cause current expenditures for investment and depreciation to be $484 billion less than budgetary outlays for those purposes over the 2022–2032 period.

Estate and Gift Taxes. Estate and gift taxes are considered a capital transfer in the NIPAs and are thus excluded from the NIPA measure of current receipts. That exclusion results in current receipts for the category that are $447 billion less than the corresponding budgetary revenues.

Differences in Netting and Timing

Netting differences do not contribute to any difference between surpluses or deficits in the budget and net federal government saving in the NIPAs because they affect revenues and outlays equally. For example, the budget records premiums paid by Medicare enrollees as offsets to outlays, and the NIPAs record those payments as receipts. That difference pushes both expenditures and receipts in the NIPAs $2.3 trillion higher than budgetary outlays and revenues. Because those increases exactly offset each other, the difference does not cause net federal government saving to diverge from budget deficits.

Similarly, timing differences may cause budgetary measures of federal activities to differ from NIPA measures in individual years, but over time they have little net effect on the divergence between the two measures. CBO approximates many of the timing differences between budgetary outlays and NIPA expenditures by accounting for shifts in outlays between fiscal years for certain programs that make payments on October 1, the first day of the fiscal year. When that date falls on a weekend, those payments are instead made at the end of September and thus are shifted into the previous fiscal year. In particular, some Medicare payments, veterans’ compensation, and pay for military personnel are scheduled to be paid on October 1 and so may be shifted into the previous year. CBO also includes estimated timing differences for certain programs related to the coronavirus pandemic. For example, although loans under the Paycheck Protection Program were recorded in the budget as outlays when they were made (in fiscal years 2020 and 2021), BEA recorded expenditures from the program over the period in which forgivable expenses were incurred by the recipients of those loans (which extends into 2022).

2. For a thorough discussion of the different purposes served by the federal budget and the NIPAs, see Congressional Budget Office, CBO’s Projections of Federal Receipts and Expenditures in the National Income and Product Accounts (May 2013), www.cbo.gov/publication/44140.

3. For CBO’s most recent baseline projections, see Congressional Budget Office, The Budget and Economic Outlook: 2022 to 2032 (May 2022), www.cbo.gov/publication/57950. As required by law, CBO constructs its baseline projections under the assumption that current laws governing revenues and spending will generally remain unchanged. Those projections thus provide a benchmark against which potential policy changes can be measured.

5. Those lifetime net costs or savings are the net present value of all expected cash flows. A present value is a single number that expresses a flow of current and future income or payments in terms of an equivalent lump sum received or paid at a specific time. The value depends on the rate of interest, known as the discount rate, used to translate future cash flows into current dollars. As required by the Federal Credit Reform Act of 1990, the budget generally records the cost of loans and loan guarantees on the basis of their average expected default rates and associated losses. An alternative approach, called fair value, incorporates a fuller cost of risk than is reflected in the average budgetary effects. Fair value includes market risk, which is the financial risk that remains even with a well-diversified portfolio and that depends solely on the performance of the economy. For further discussion, see Congressional Budget Office, Measuring the Cost of Government Activities That Involve Financial Risk (March 2021), www.cbo.gov/publication/56778, and Michael Falkenheim, Fair-Value Budgeting: Practical Issues, Working Paper 2021-08 (Congressional Budget Office, July 2021), www.cbo.gov/publication/57264.

This report is an annual publication prepared in response to interest expressed by Members of Congress. In keeping with CBO’s mandate to provide objective, impartial analysis, the report makes no recommendations.

Dan Ready wrote the report with assistance from Tess Prendergast; with guidance from Christina Hawley Anthony, Theresa Gullo, John McClelland, and Joshua Shakin; and with contributions from the staff of the Joint Committee on Taxation.

Robert Sunshine reviewed the report. John Skeen edited it, and R. L. Rebach prepared it for publication. The report and previous editions are available on the agency’s website, at www.cbo.gov/publication/58356 and https://go.usa.gov/xyp2M, respectively.

CBO seeks feedback to make its work as useful as possible. Please send comments to communications@cbo.gov.