Unless this report indicates otherwise, all years referred to are federal fiscal years, which run from October 1 to September 30 and are designated by the calendar year in which they end. Numbers in the text and tables may not add up to totals because of rounding.

The federal government’s fiscal transactions are recorded in two major sets of accounts: The Budget of the United States Government (often called the federal budget), which is prepared by the Office of Management and Budget, and the national income and product accounts (NIPAs), which are produced by the Department of Commerce’s Bureau of Economic Analysis (BEA).1 The federal budget is the framework generally used by executive branch agencies and the Congress; it is also the presentation of budgetary activity that is most often discussed in the press. The NIPAs, by contrast, are not intended to help the government plan or manage its activities. Instead, those accounts provide a general framework for describing the U.S. economy and show how the federal government fits into that framework.2

Each year, the Congressional Budget Office publishes projections of federal revenues and outlays for the current fiscal year and the next 10 years. Those baseline budget projections reflect the standard structure for budgetary accounting.3 This report presents CBO’s revenue and outlay projections for 2022 to 2031 in the NIPA framework (see Table 1). 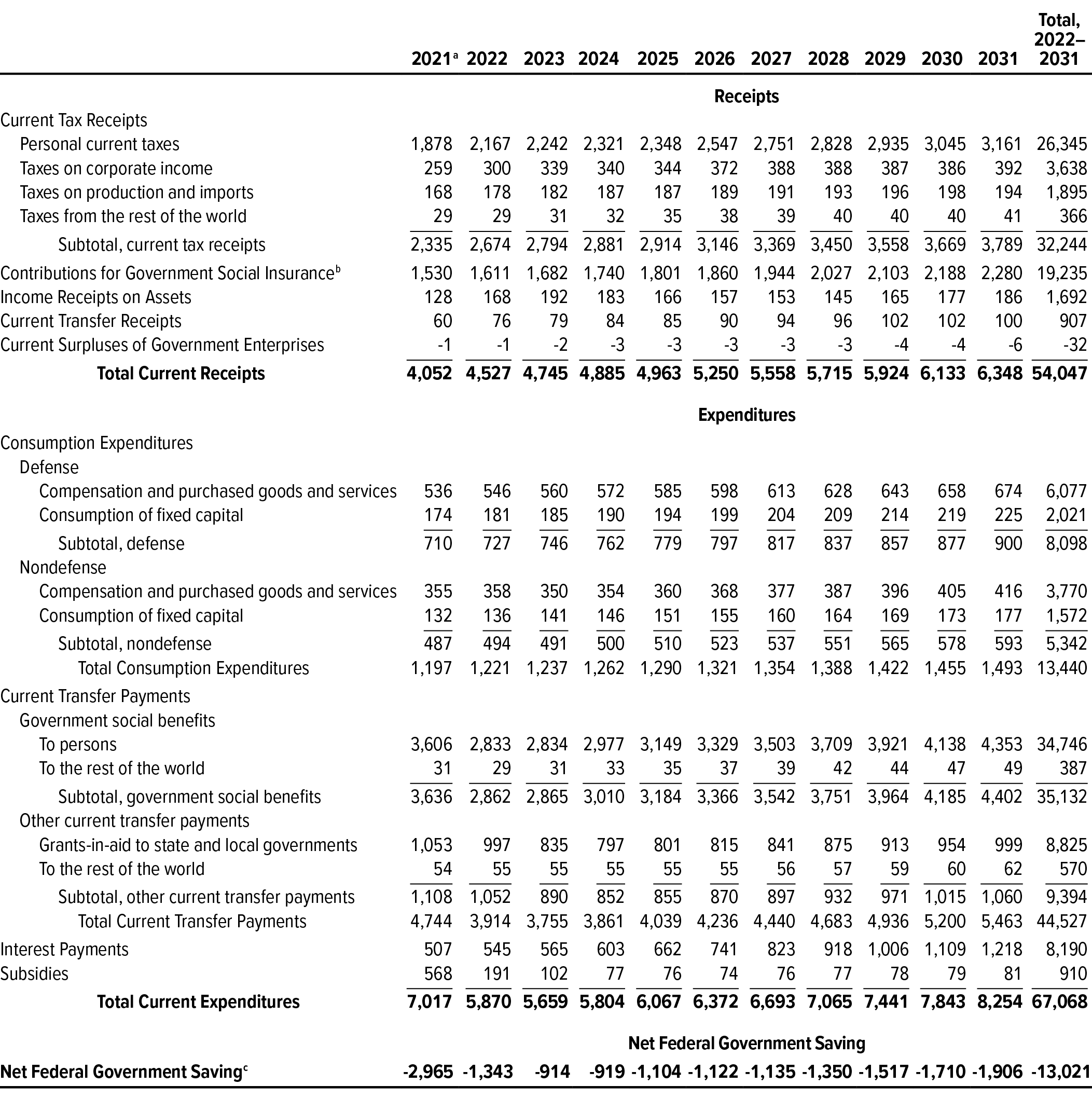 a. With one exception, values for 2021 are based on quarterly estimates of gross domestic product published by the Bureau of Economic Analysis (BEA) as of October 2021. The estimate of taxes on corporate income is based on BEA’s data for the first three fiscal quarters and on CBO’s estimate for the fourth quarter.

Because of conceptual differences between the two sets of accounts, cumulative current receipts for the 2022–2031 period in the NIPAs exceed projected revenues in CBO’s baseline by about 5 percent, and current expenditures in the NIPAs exceed projected outlays in the baseline by about 6 percent. In the NIPAs, net federal government saving (that is, current receipts minus current expenditures) is projected to total −$13.0 trillion over the 2022–2031 period; the deficits in CBO’s baseline budget projections total $12.1 trillion over the same period.

The budget of the federal government is best understood as an information and management tool that policymakers use to allocate the government’s resources.4 Its main objectives are to assist in policy deliberations, facilitate the management and control of federal activities, and help the Treasury manage cash balances and determine borrowing needs. In most cases, cash accounting is used to report items in the federal budget—that is, outlays and revenues are recorded when payments are made and receipts are collected. The budget follows the federal fiscal year, which runs from October 1 to September 30.

In some cases, lawmakers have decided that different accounting approaches would provide better measures of costs than cash-based accounting. For credit programs, in particular, cash-based accounting is ill-suited: Tracking only the annual cash flows of federal direct loans or loan guarantees would give a misleading view of the true costs or savings associated with those transactions. To address that problem, the Federal Credit Reform Act of 1990 requires that the estimated net costs or savings over the lifetime of the loan or loan guarantee—the net present value of all expected cash flows—be recorded in the budget as outlays at the time of origination.5 Such estimates are subject to revision over time in response to unexpected changes in interest rates or other factors.

The National Income and Product Accounts

The NIPAs are not intended to help the government plan or manage its activities. Instead, they provide a general framework that describes the entire U.S. economy and show how the federal government fits within that framework. The NIPAs track current economywide production and the resulting income for specific periods, and they report the major sources of production and the recipients of the income. They measure the federal government’s activities over calendar years and calendar quarters, but totals for fiscal years can be derived from the quarterly estimates. (The tables in this report show amounts for fiscal years.)

In the context of the NIPAs, the federal government is both a producer and a consumer. Its workforce uses purchased goods and services and government-owned capital (structures, equipment, software, and research and development) to provide services to the public. Because those services are consumed by the public, they are, by convention, regarded in the NIPAs as federal consumption expenditures. The federal government also affects the resources available to the private sector through taxes and transfers. All those activities are recorded in a way that is consistent with the NIPAs’ treatment of other sectors of the economy.

All three categories can cause totals for receipts and expenditures in the NIPAs to differ from totals for revenues and outlays in the budget (see Table 2). The netting differences do not, however, contribute to any difference between deficits in the budget and net federal government saving in the NIPAs because they affect revenues and outlays equally. Timing differences have little net effect on the discrepancy between deficits and net federal saving over the 10 years shown in the table. 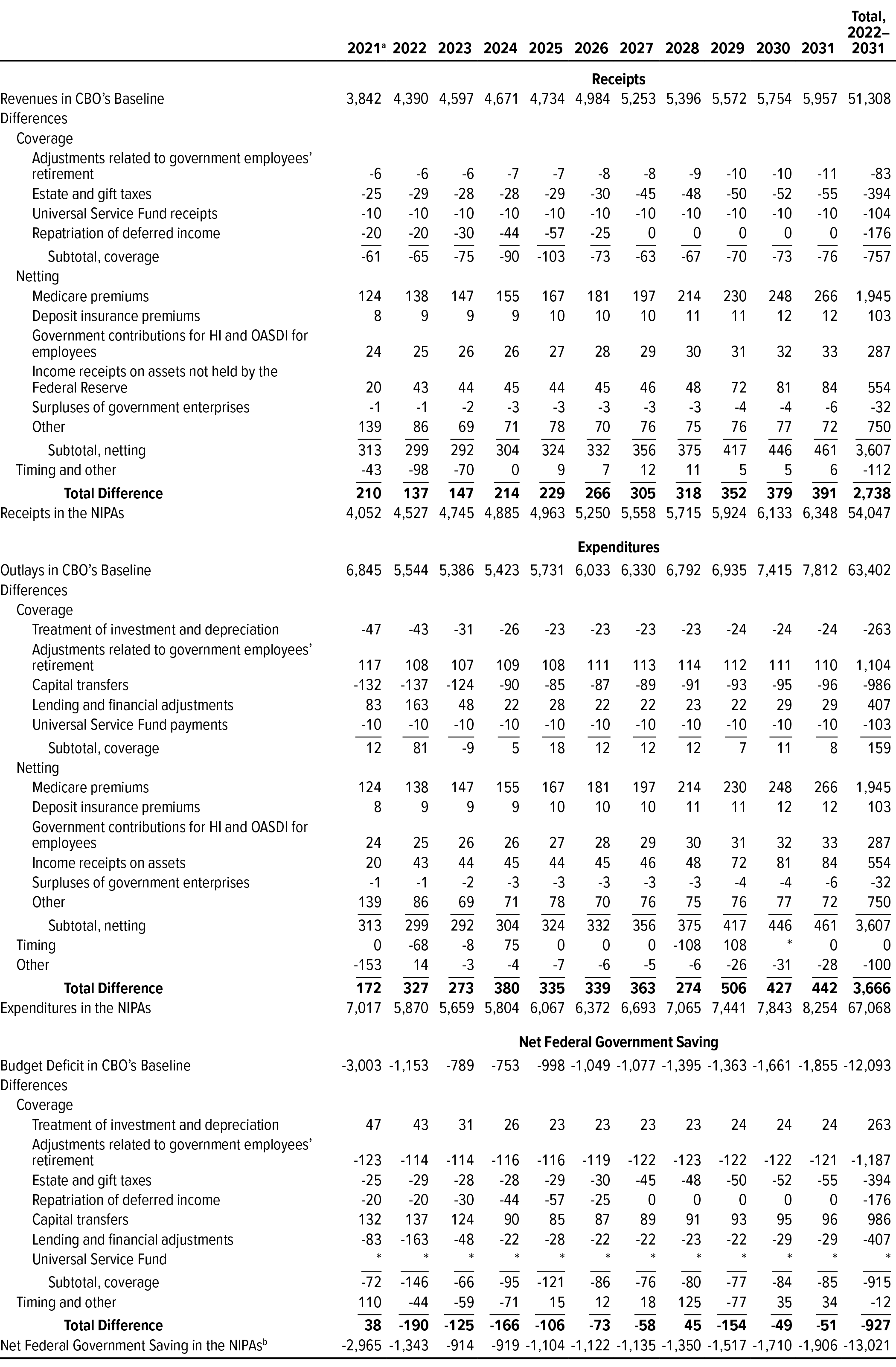 a. Values for 2021 are based on the projected amounts in CBO’s July 2021 baseline. Actual values differed from those projections.

Differences in coverage account for most of the divergence between the NIPAs’ and budget’s measures of the federal deficit. The largest difference in coverage stems from BEA’s treatment of federal pension plans, which differs from the budget’s treatment of such plans in several ways:

The annual differences stemming from the two approaches to accounting for transactions for federal pensions are shown in Table 2 as “Adjustments related to government employees’ retirement.” Over the 2022–2031 period, those differences cause the negative net federal government saving reported in the NIPAs to be $1.2 trillion more than the cumulative deficit in CBO’s baseline projections. Other differences—totaling $0.3 trillion—partially offset that amount, reducing the discrepancy between the NIPAs’ measure and the cumulative deficit.6

Since March 2020, lawmakers have enacted a variety of provisions creating new programs or supplementing existing programs to respond to the 2020–2021 corona­virus pandemic. Changes to existing programs generally affected the same components of expenditures in the NIPAs as those preexisting programs.7 For example, the Coronavirus Aid, Relief, and Economic Security (CARES) Act (Public Law 116-136) supplemented the existing unemployment compensation program by expanding the amount of benefits and the eligible population. The preexisting and the additional unemployment compensation benefits are categorized almost entirely as domestic transfers in Table 1.

Other programs affected the NIPAs’ measure of current federal expenditures in more complicated ways. For example, the Paycheck Protection Program (PPP), which was created under the CARES Act and expanded under subsequent legislation, granted forgivable loans to businesses affected by the pandemic.8 BEA has classified the forgiven portions of loans to businesses as subsidies, the forgiven portions of loans to nonprofit institutions serving households as transfer payments, and the administrative expenses of the program as nondefense consumption expenditures. Furthermore, although PPP loans were recorded in the budget as outlays at the time they were made, BEA recorded expenditures from the PPP over the period in which forgivable expenses were incurred. The estimated effects of the PPP will be revised in both the budget and the NIPAs as loans are forgiven.

2. For a thorough discussion of the different purposes served by the federal budget and the NIPAs, see Congressional Budget Office, CBO’s Projections of Federal Receipts and Expenditures in the National Income and Product Accounts (May 2013), www.cbo.gov/publication/44140.

3. For CBO’s most recent baseline projections, see Congressional Budget Office, Additional Information About the Updated Budget and Economic Outlook: 2021 to 2031 (July 2021), www.cbo.gov/publication/57263. As required by law, CBO constructs its baseline projections under the assumption that current laws governing revenues and spending will generally remain unchanged. Those projections thus provide a benchmark against which potential policy changes can be measured.

5. A present value is a single number that expresses a flow of current and future income or payments in terms of an equivalent lump sum received or paid at a specific time. The value depends on the rate of interest, known as the discount rate, used to translate future cash flows into current dollars.

8. For more information about how the PPP affects the NIPAs, see Bureau of Economic Analysis, “How Does the Paycheck Protection Program Impact the National Income and Product Accounts (NIPAs)?” (May 17, 2021), www.bea.gov/help/faq/1408.

This report is an annual publication that provides additional information about the baseline budget projections published by the Congressional Budget Office. Previous editions are available at https://go.usa.gov/xeDa5. In keeping with CBO’s mandate to provide objective, impartial analysis, the report makes no recommendations.

Dan Ready wrote the report with assistance from Tess Prendergast; with guidance from Christina Hawley Anthony, Theresa Gullo, John McClelland, and Joshua Shakin; and with contributions from the staff of the Joint Committee on Taxation.

Robert Sunshine reviewed the report. Bo Peery edited it, and R. L. Rebach prepared it for publication. The report is available at www.cbo.gov/publication/57432.

CBO seeks feedback to make its work as useful as possible. Please send comments to communications@cbo.gov.