Unless this report indicates otherwise, all years referred to when describing the budget outlook are federal fiscal years, which run from October 1 to September 30 and are designated by the calendar year in which they end. Years referred to in describing the economic outlook are calendar years. Numbers in the text and tables may not add up to totals because of rounding.

The Congressional Budget Office regularly publishes reports presenting projections of what federal budget deficits, debt, revenues, and spending—and the economic path underlying them—would be for the current year and for the following 10 years if current laws governing taxes and spending generally remained unchanged. This report presents the agency’s most recent budget and economic projections, which are based on the laws in effect as of May 18, 2021. This presentation of CBO’s projections is much shorter than usual. The information is less detailed so that CBO can provide it to lawmakers as quickly as possible. CBO will publish more detailed information about its projections later this month.1

In CBO’s budget projections (called the baseline), the federal budget deficit for fiscal year 2021 is $3.0 trillion, nearly $130 billion less than the deficit recorded in 2020 but triple the shortfall recorded in 2019. Relative to the size of the economy, this year’s deficit is projected to total 13.4 percent of gross domestic product (GDP), making it the second largest since 1945, exceeded only by the 14.9 percent shortfall recorded last year. The economic disruption caused by the 2020–2021 coronavirus pandemic and the legislation enacted in response continue to weigh on the deficit (which was already large by historical standards before the pandemic).

Baseline deficits under current law are significantly smaller after 2021 and average $1.2 trillion from 2022 to 2031. They average 4.2 percent of GDP through 2031, well above their 50-year average of 3.3 percent. In CBO’s projections, the deficit declines to about 3 percent of GDP in 2023 and 2024 before increasing again, reaching 5.5 percent in 2031 (see Table 1). By the end of the period, both primary deficits (which exclude net outlays for interest) and interest outlays are increasing in nominal terms and as a share of GDP. 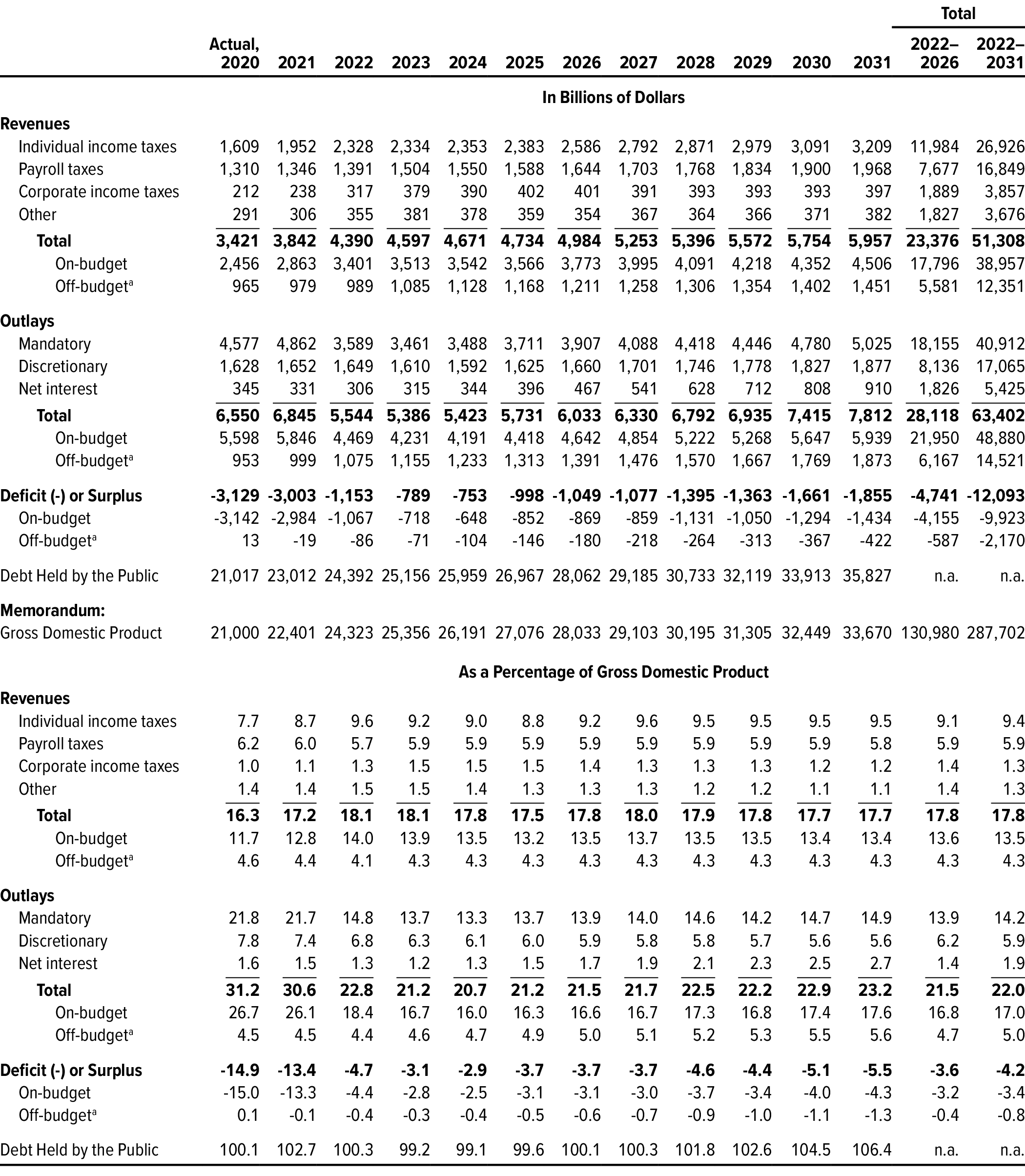 a. The revenues and outlays of the Social Security trust funds and the net cash flow of the Postal Service are classified as off-budget.

Revenues in CBO’s baseline increase to 17 percent of GDP in 2021 and are relatively stable thereafter, averaging 18 percent from 2022 through 2031. Outlays are projected to decline from 31 percent of GDP this year to about 21 percent from 2023 through 2025 as pandemic-related spending wanes and low interest rates persist. Outlays then increase relative to GDP, owing to rising interest costs and greater spending for major entitlement programs.

Compared with its estimates from February 2021, CBO’s estimate of the deficit for 2021 is now $745 billion (or 33 percent) larger, and its projection of the cumulative deficit between 2022 and 2031, $12.1 trillion, is now $173 billion (or 1 percent) smaller. In 2021, recently enacted legislation—primarily the American Rescue Plan Act of 2021 (Public Law 117-2)—increases the projected deficit by $1.1 trillion, mostly as a result of higher spending. The largest budgetary effects stem from additional funding for recovery rebates for individuals, for state and local governments, for educational institutions, and for an extension of expanded unemployment compensation. The effects of a stronger economy as well as technical changes (that is, changes that are neither legislative nor economic) partially offset the deficit effects of recently enacted legislation. For subsequent years, CBO has increased its projections of both revenues and outlays—the former by more than the latter.

Projected revenues over the next decade are now higher because of the stronger economy and consequent higher taxable incomes. In addition, tax collections in 2020 and 2021—particularly amounts collected from individual income taxes—were stronger than the amounts implied by currently available data on economic activity and the past relationship with revenues. In CBO’s projections, that unexpected strength dissipates over the next few years. Besides resulting from the direct effects of recent legislation, the changes to outlays since February over the projection period are largely attributable to higher interest rates (which boost net interest costs) and higher projected inflation and wages (which increase the costs of major benefit programs).

CBO’s projections are constructed in accordance with the Balanced Budget and Emergency Deficit Control Act of 1985 (P.L. 99-177) and the Congressional Budget Act of 1974 (P.L. 93-344). Those laws require CBO to construct its baseline projections under the assumption that current laws governing revenues and spending will generally stay the same and that discretionary appropriations in future years will match current funding, with adjustments for inflation.2

CBO’s baseline is not intended to provide a forecast of future budgetary and economic outcomes; rather, it provides a benchmark that policymakers can use to assess the potential effects of future policy decisions. Future legislative action could lead to markedly different outcomes. Even if federal laws remained unaltered for the next decade, actual budgetary outcomes would probably differ from CBO’s baseline—not only because of unanticipated economic developments, but also as a result of many other factors that affect federal revenues and outlays.

As the pandemic eases and demand for consumer services surges, real (inflation-adjusted) GDP is projected to increase by 7.4 percent and surpass its potential (maximum sustainable) level by the end of 2021 (see Table 2). The annual growth of real GDP averages 2.8 percent during the five-year period from 2021 to 2025, exceeding the 2.0 percent growth rate of real potential GDP. Over the 2026–2031 period, real GDP growth averages 1.6 percent, which is less than its long-term historical average, primarily because the labor force is expected to grow more slowly than it has in the past. 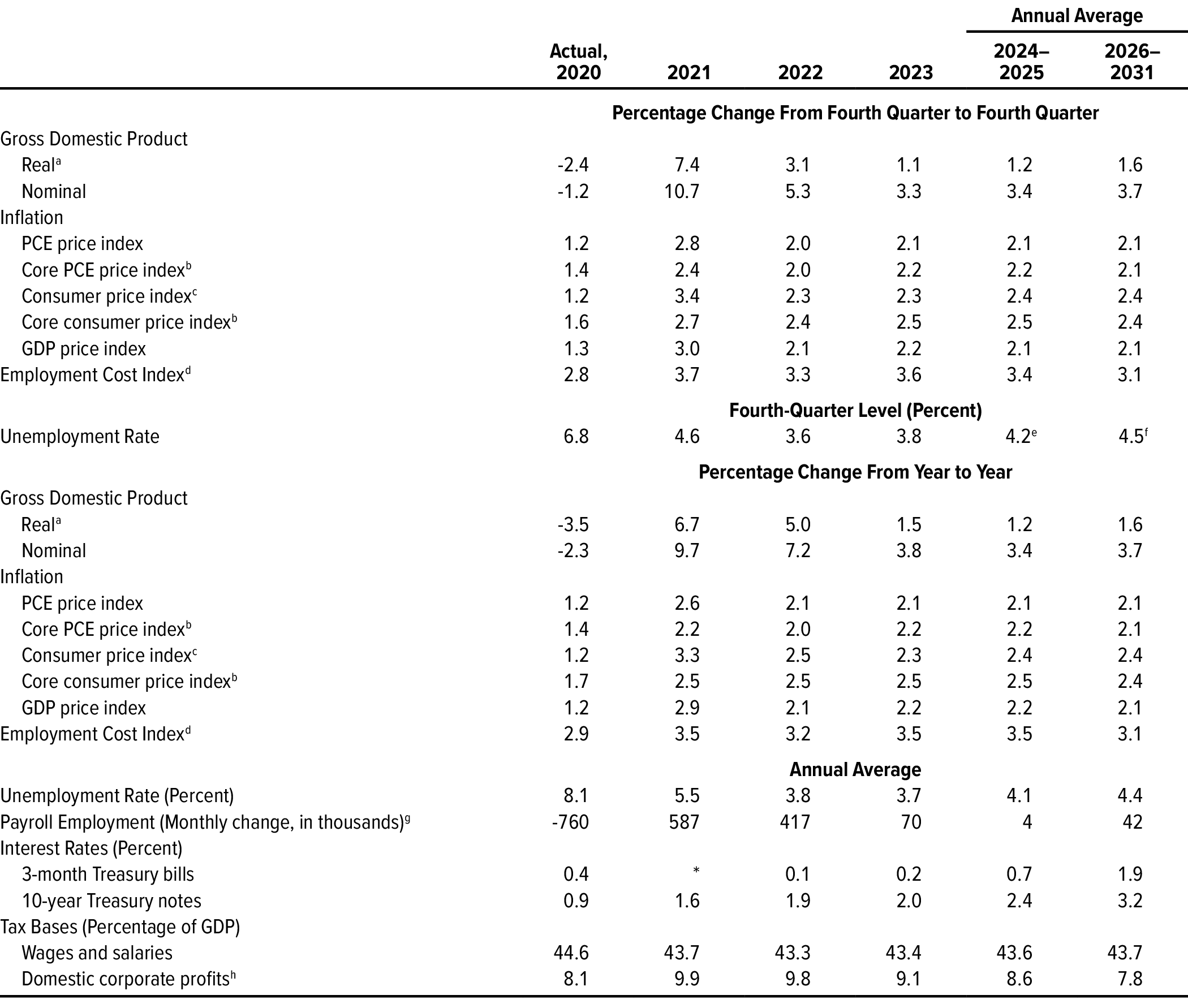 d. The employment cost index for wages and salaries of workers in private industries.

h. Adjusted to remove distortions in depreciation allowances caused by tax rules and to exclude the effect of inflation on the value of inventories.

In CBO’s projections, employment grows quickly in the second half of 2021—reflecting increased demand for goods and services and the waning of factors dampening the supply of labor, including health concerns and enhanced unemployment insurance benefits. Employment surpasses its prepandemic level in mid-2022. The unemployment rate declines through 2022 and then remains near or below 4.0 percent for several years.

Inflation rises sharply in 2021 and then moderates. The price index for personal consumption expenditures (PCE) rises by 2.8 percent this year, as increases in the supply of goods and services lag behind increases in the demand for them, adding to inflationary pressures. By 2022, increases in supply keep up with increases in demand, and PCE price inflation falls to 2.0 percent during the year. After 2022, PCE price inflation remains at 2.1 percent through 2025, above its rate before the pandemic. The interest rate on 10-year Treasury notes remains low but rises as the economy continues to expand, reaching 2.7 percent by the end of 2025.

Compared with its estimates in February 2021, CBO now projects stronger economic growth. Three main factors are responsible for that result. First, the agency expects recently enacted fiscal policies to boost output. Second, CBO projects that the effects of social distancing on economic activity in 2021 will be smaller than the effects it projected in February, reflecting a more rapid return to normalcy. Third, CBO has raised its estimate of the consumer spending that results from the additional savings that households accumulated during the pandemic. As a result, the agency’s projections of inflation are also higher than the projections it made in February, as output now exceeds its potential level sooner and by a larger amount than previously anticipated. Interest rates are also projected to be higher than CBO expected in February, reflecting the more positive outlook for economic growth.

1. CBO plans to publish additional information about its latest budget and economic projections on July 21, 2021.

2. In consultation with the House and Senate Committees on the Budget, however, CBO deviated from those standard procedures when constructing its current baseline for discretionary spending. Because of the unusual size and nature of the emergency funding provided in response to the coronavirus pandemic, the agency did not extrapolate the $184 billion in discretionary budget authority that has been provided for such purposes so far in 2021. Other emergency funding was projected to continue in the future, with increases for inflation each year after 2021.

This document is one of a series of reports on the state of the budget and the economy that the Congressional Budget Office issues each year. It satisfies the requirement in section 202(e) of the Congressional Budget Act of 1974 for CBO to submit to the Committees on the Budget periodic reports about fiscal policy and to provide baseline projections of the federal budget. In keeping with CBO’s mandate to provide objective, impartial analysis, this report makes no recommendations.

Mark Doms, Mark Hadley, Jeffrey Kling, and Robert Sunshine reviewed the report. Caitlin Verboon was the editor, and Jorge Salazar was the graphics editor. This report is available on CBO’s website (www.cbo.gov/publication/57218).