The Department of Defense uses unmanned aerial systems (UASs) for some intelligence, surveillance, and reconnaissance (ISR) missions. In this report, the Congressional Budget Office analyzes the usage patterns and costs of three UASs and six manned aircraft with similar ISR missions and compares the life-cycle costs per flying hour (acquisition costs per flying hour plus recurring costs per flying hour) of the Air Force’s unmanned RQ-4 and the Navy’s manned P-8.

Usage Patterns. Annually, UASs have flown about twice as many flying hours as manned ISR aircraft because they have flown longer sorties. They have also been destroyed at a considerably higher rate than manned systems.

Costs. UASs have had both lower acquisition costs and recurring costs per flying hour.

Other Considerations. Cost is only one factor to consider when choosing between UASs and manned aircraft. In some situations and for some missions, UASs may be preferable because they may provide important operational advantages over manned aircraft. For example, UASs are especially well-suited for long duration ISR missions and operations in particularly dangerous settings because there is no risk of personnel onboard being captured or killed. But for some types of situations and missions, having people on board may enhance the mission’s military value and likelihood of success.

For the past two decades, the Department of Defense (DoD) has been selectively using unmanned aerial systems (UASs) in place of manned intelligence, surveillance, and reconnaissance (ISR) aircraft, flying them for much longer durations, on average. UASs generally have lower recurring costs per flying hour than manned aircraft. However, comparing the life-cycle costs (including acquisition costs) per flying hour of the Air Force’s unmanned RQ-4 and the Navy’s manned P-8, the Congressional Budget Office found that UASs’ cost advantage may not be as large when the costs of acquiring the aircraft are considered.

Conventional wisdom holds that UASs cost less than manned aircraft because they do not need life support equipment such as oxygen systems, cabin pressurization, and ejection seats. However, an earlier CBO analysis noted that the magnitude of UASs’ cost advantages was uncertain. (See Congressional Budget Office, Policy Options for Unmanned Aircraft Systems [June 2011], www.cbo.gov/publication/41448.) This report further assesses evidence about differences in usage patterns and life-cycle costs per flying hour associated with UASs, considering both up-front and recurring costs.

Although all nine manned and unmanned aircraft discussed in this report perform broadly similar missions, they have different capabilities:

CBO has no basis for comparing the value of ISR data produced by manned aircraft with that produced by UASs. Therefore, this analysis provides information about only one aspect (life-cycle costs) of the broader question of when UASs might be used in place of manned aircraft.

To conduct its analysis, CBO used the Air Force’s Reliability and Maintainability Information System (REMIS), which tracks the availability and flying hours of specific Air Force aircraft, and the Air Force Total Ownership Cost (AFTOC) system, which provides data on costs to maintain and operate the aircraft. CBO separately gathered estimates of the up-front acquisition costs of Air Force aircraft from historical Selected Acquisition Reports (SARs). For the P-8, CBO used the Navy’s DECKPLATE system and the P-8’s December 2019 SAR, which provide information about its availability, flying hours, acquisition costs, and maintenance and operating costs.

Although those aircraft differ in many ways, all nine conduct broadly similar ISR missions. The manned ISR aircraft are capable of flying missions lasting many hours, and, with the exception of the U-2, they are all derivatives of commercial aircraft. (The U-2 was designed specifically for ISR.) The unmanned aircraft were also designed for ISR and can fly longer missions than the manned aircraft. The five manned Air Force ISR aircraft are the oldest of the group, and the Navy’s P-8 is the newest.

Appearance and Relative Size of Unmanned and Manned ISR Aircraft 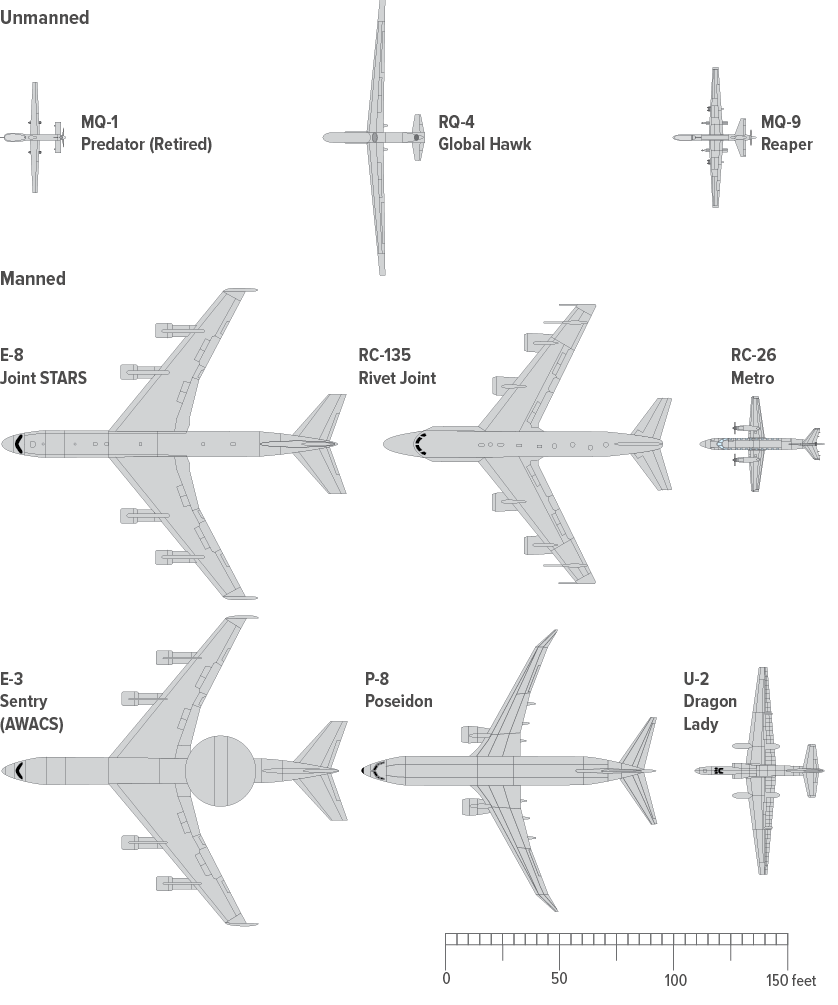 Air Force UASs have flown roughly twice as many hours per aircraft per year, on average, as its manned ISR aircraft have flown.

Air Force UASs can be airborne for lengths of time that would be challenging for human crews. However, depending on the situation, DoD may prefer two 8-hour manned sorties to one 16-hour UAS sortie.

Air Force MQ-1s and RQ-4s have flown fewer sorties per year than manned aircraft have.

Aircraft availability refers to the percentage of mission-capable aircraft that is not in storage or undergoing repairs. (The Navy terms that rate

.) The availability of Air Force UASs has been higher than that of most manned ISR aircraft.

UASs have been destroyed in accidents at considerably greater rates than manned ISR aircraft. 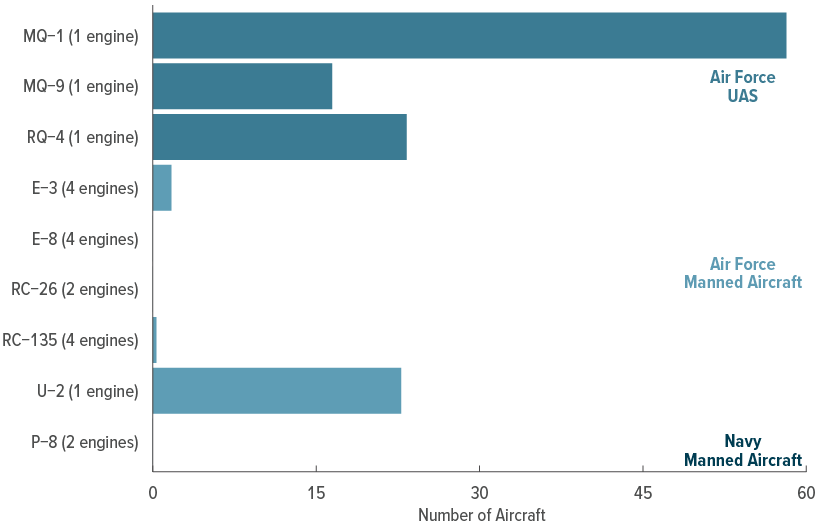 There are several possible explanations for the higher rate of UAS destruction shown here: They have a single engine (multi-engine aircraft are typically able to safely fly and land if one engine is disabled); they may be designed to lower safety standards because they do not carry people; and they have greater risk of destruction if they lose communication connectivity. 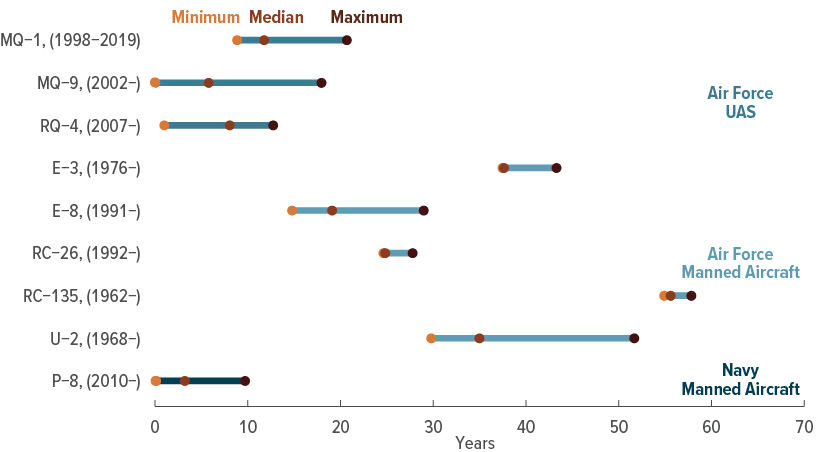 The Air Force’s oldest UAS, an MQ-1, was about 20 years old when it was retired. By contrast, the RC-135s and some U-2s (both manned) have been in operation for more than 50 years.

Lifetime Flying Hours of Aircraft in Service on December 31, 2019 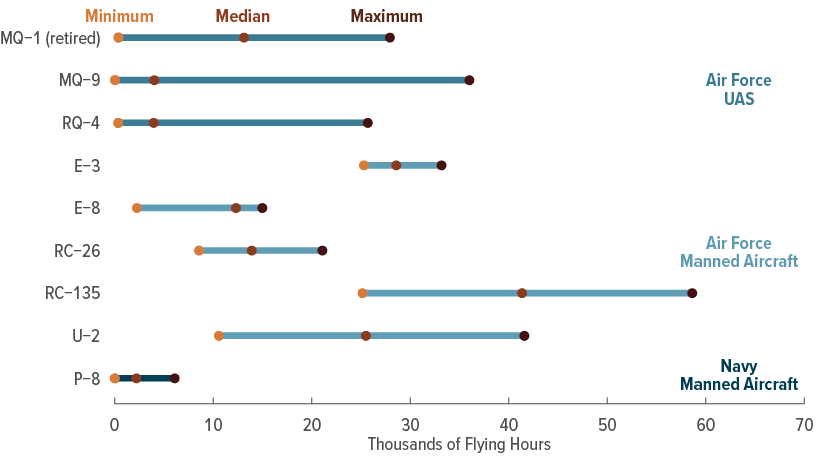 Manned systems and UASs have different missions, are used in different ways, and process and analyze data in different places (onboard versus on the ground); those differences make comparing the systems complicated. Several existing manned ISR aircraft, such as the E-3, E-8, and RC-135, are based on 1960s-vintage 707 aircraft and may be more expensive to operate than future manned systems would be. Additionally, if one is considering future purchases, comparisons should include acquisition costs as well as operating costs.

All costs in this analysis are expressed in 2020 dollars. 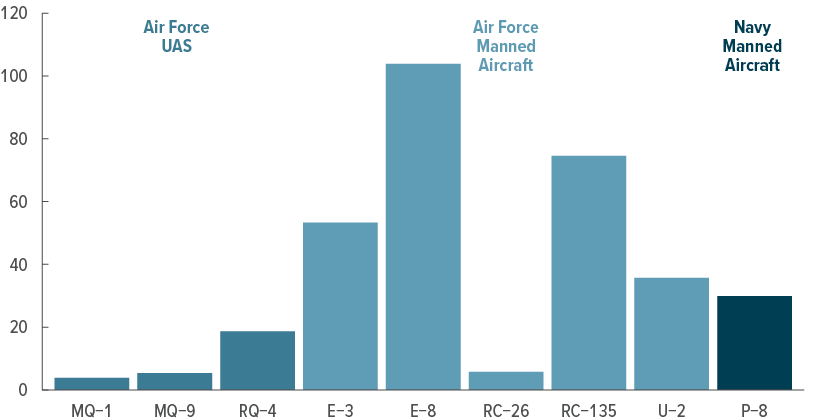 Recurring costs of unmanned systems have generally been lower because the aircraft are smaller, have only one engine, and may not be maintained to the same safety standards as manned aircraft.

The manned RC-26 had especially low recurring costs because it is a small, commercially derived, turboprop aircraft.

The MQ-1 and MQ-9 have cost less to acquire than the manned ISR aircraft, but the RQ-4 was much more costly than those other unmanned systems, in part because of its larger size and the sophistication of its sensors.

A Comparison of Life-Cycle Costs per Flying Hour

CBO examined the costs of the Air Force’s unmanned RQ-4 and the Navy’s manned P-8 to illustrate how the life-cycle costs per flying hour of an unmanned aircraft might be compared with those of a manned aircraft. CBO selected them because they have similar missions and technologies that are from the same era. (The Air Force’s manned aircraft considered in this report are much older than the RQ-4s and P-8s.) Although the P-8’s missions include antisubmarine and anti-surface ship warfare in addition to maritime ISR, it is similar to the RQ-4 in that it undertakes patrol missions lasting many hours.

When estimating life-cycle costs per flying hour, CBO included both acquisition and recurring costs. Considering the following factors, CBO found that the life-cycle costs per flying hour of the RQ-4 and P-8 are about $35,200 and $42,300, respectively; that 17 percent difference is much smaller than the estimated 38 percent difference in recurring costs for the two aircraft:

CBO used a 20-year life span as a starting point for its calculations because the Air Force has so far retired all of its UASs after about 20 years of service, but the agency also examined the effect that longer service lives would have on the RQ-4’s life-cycle costs. CBO projects that a P-8 could be operated for 50 years. That projection is double what is presented in the P-8’s SAR, but it is consistent with how long DoD has operated other manned ISR aircraft, including the P-3.

A Comparison of Unmanned RQ-4s and Manned P-8s

Sensitivity of the Life-Cycle Cost Comparison

A number of factors could affect the comparison between the life-cycle costs per flying hour of the two aircraft. For example, if RQ-4s were destroyed at a greater rate than they have been to date, their cost advantage relative to P-8s would decrease. Conversely, considering the possibility that P-8s could be accidentally destroyed would increase the RQ-4’s cost advantage.

The Effects of Changing the RQ-4’s Destroyed Aircraft Rate

The cost advantage of the RQ-4s would disappear completely if they were destroyed at a rate of about 70 per million flying hours (triple the observed rate, denoted by the vertical line, and above the rate experienced by the MQ-1, the aircraft in this analysis with the highest accidental destruction rate).

Longer life spans would reduce the RQ-4’s life-cycle costs per flying hour, but the amount of those reductions would diminish as the aircraft aged.

The aircraft vary in certain ways, including the following:

Consider a hypothetical manned aircraft. Its up-front acquisition cost would be

. If the aircraft was not at risk for being destroyed in an accident

, the aircraft would fly

hours per year, incurring costs of

represents the real interest rate) would be, respectively,

The life-cycle cost per manned flying hour would therefore be

). In the first year, the aircraft would fly

. However, the additional consideration of a destruction rate greater than zero

modestly complicates the calculation for unmanned aircraft because it requires consideration of fractional “expected aircraft.” For each flying hour, there would be a probability

, so in the second year, the aircraft would be expected to fly

, but the number of aircraft would be expected to fall. In the third year, expected unmanned flying hours would again decrease to

represents the real interest rate) would be, respectively,

In its analysis of the manned P-8’s and unmanned RQ-4’s life-cycle costs per flying hours, CBO used the following base case parameters for the six variables:

The real interest rate is based on CBO’s projection of the average interest rate over the next 10 years after removing the effects of inflation—specifically, of the real rate on 30-year inflation-indexed securities.

This Congressional Budget Office report was prepared at the request of the Ranking Member of the Senate Armed Services Committee. In keeping with CBO’s mandate to provide objective, impartial analysis, it makes no recommendations.

Mark Doms, Jeffrey Kling, and Robert Sunshine reviewed the report. Caitlin Verboon was the editor, and R. L. Rebach was the graphics editor and cover illustrator. The report is available on CBO’s website (www.cbo.gov/publication/57090).