Unless this report indicates otherwise, all years referred to are calendar years. Federal fiscal years run from October 1 to September 30 and are designated by the calendar year in which they end. Numbers in the text and tables may not add up to totals because of rounding.

The 2020–2021 coronavirus pandemic caused severe economic disruptions last year as households, governments, and businesses adopted a variety of mandatory and voluntary ­measures—collectively referred to here as social distancing—to limit in-person interactions that could spread the virus. The impact was focused on particular sectors of the economy, such as travel and hospitality, and job losses were concentrated among lower-wage workers.

Over the course of the coming year, vaccination is expected to greatly reduce the number of new cases of COVID-19, the disease caused by the coronavirus. As a result, the extent of social distancing is expected to decline. In its new economic forecast, which covers the period from 2021 to 2031, the Congressional Budget Office therefore projects that the economic expansion that began in mid-2020 will continue (see Table 1). Specifically, real (inflation-adjusted) gross domestic product (GDP) is projected to return to its prepandemic level in mid-2021 and to surpass its potential (that is, its maximum sustainable) level in early 2025. In CBO’s projections, the unemployment rate gradually declines through 2026, and the number of people employed returns to its prepandemic level in 2024. 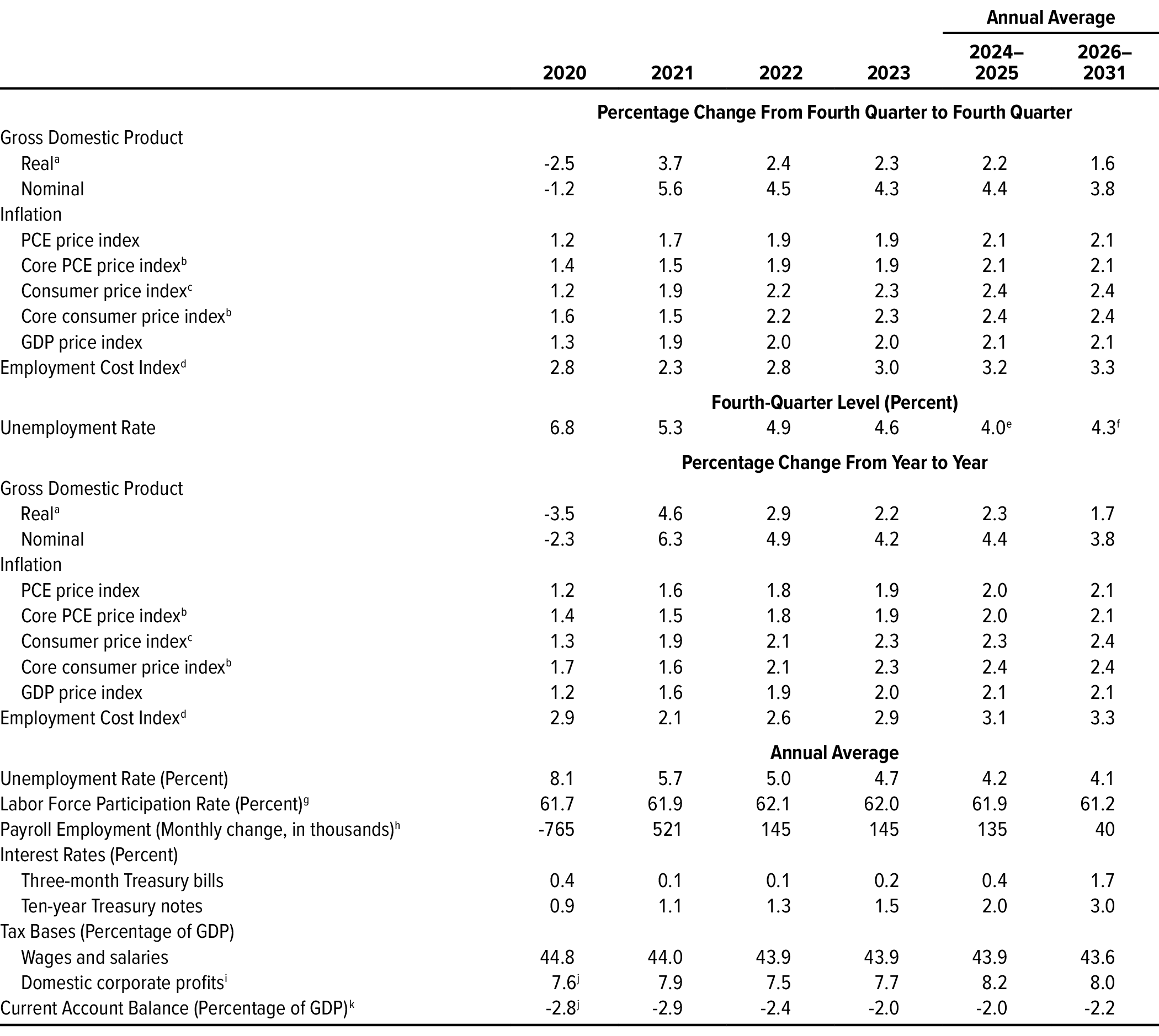 d. The employment cost index for wages and salaries of workers in private industry.

g. The labor force participation rate is the share of the civilian noninstitutionalized population age 16 or older that is working or actively seeking work.

i. Adjusted to remove distortions in depreciation allowances caused by tax rules and to exclude the effects of changes in prices on the value of inventories.

k. Represents net exports of goods and services, net capital income, and net transfer payments between the United States and the rest of the world.

CBO is using this economic forecast as the basis for updating its budget projections for 2021 to 2031. The agency plans to release those budget projections later in February and a more detailed report about this forecast later this winter. The forecast incorporates economic and other information available as of January 12, 2021, as well as estimates of the economic effects of all legislation (including pandemic-related legislation) enacted up to that date.

In CBO’s projections, which incorporate the assumptions that current laws governing federal taxes and spending (as of January 12) generally remain in place and that no significant additional emergency funding or aid is provided, the economy continues to strengthen during the next five years.

CBO’s projections of economic growth have been boosted by various laws enacted in 2020.2 Most recently, in late December, the Consolidated Appropriations Act, 2021 (Public Law 116-260), appropriated funds for the remainder of fiscal year 2021, provided additional emergency funding for federal agencies to respond to the public health emergency created by the pandemic, and provided financial support to households, businesses, and nonfederal governments affected by the economic downturn, among other measures. CBO estimates that the pandemic-related provisions in that legislation will add $774 billion to the deficit in fiscal year 2021 and $98 billion in 2022.3 Those provisions will boost the level of real GDP by 1.5 percent, on average, in calendar years 2021 and 2022, CBO estimates; the bulk of the impact will occur in 2021.

In CBO’s projections, the economy continues to expand from 2026 to 2031. Real GDP grows by 1.6 percent per year, on average (see Table 2). Real potential GDP grows slightly more rapidly (see Table 3). For most of the period, the Federal Reserve allows inflation to remain above its target level; the level of real GDP likewise remains above the level of real potential GDP for several years. Eventually, less accommodative policies on the part of the Federal Reserve help push GDP back toward its historical average relationship with potential GDP.

The Projected Growth of Real GDP and Its Components 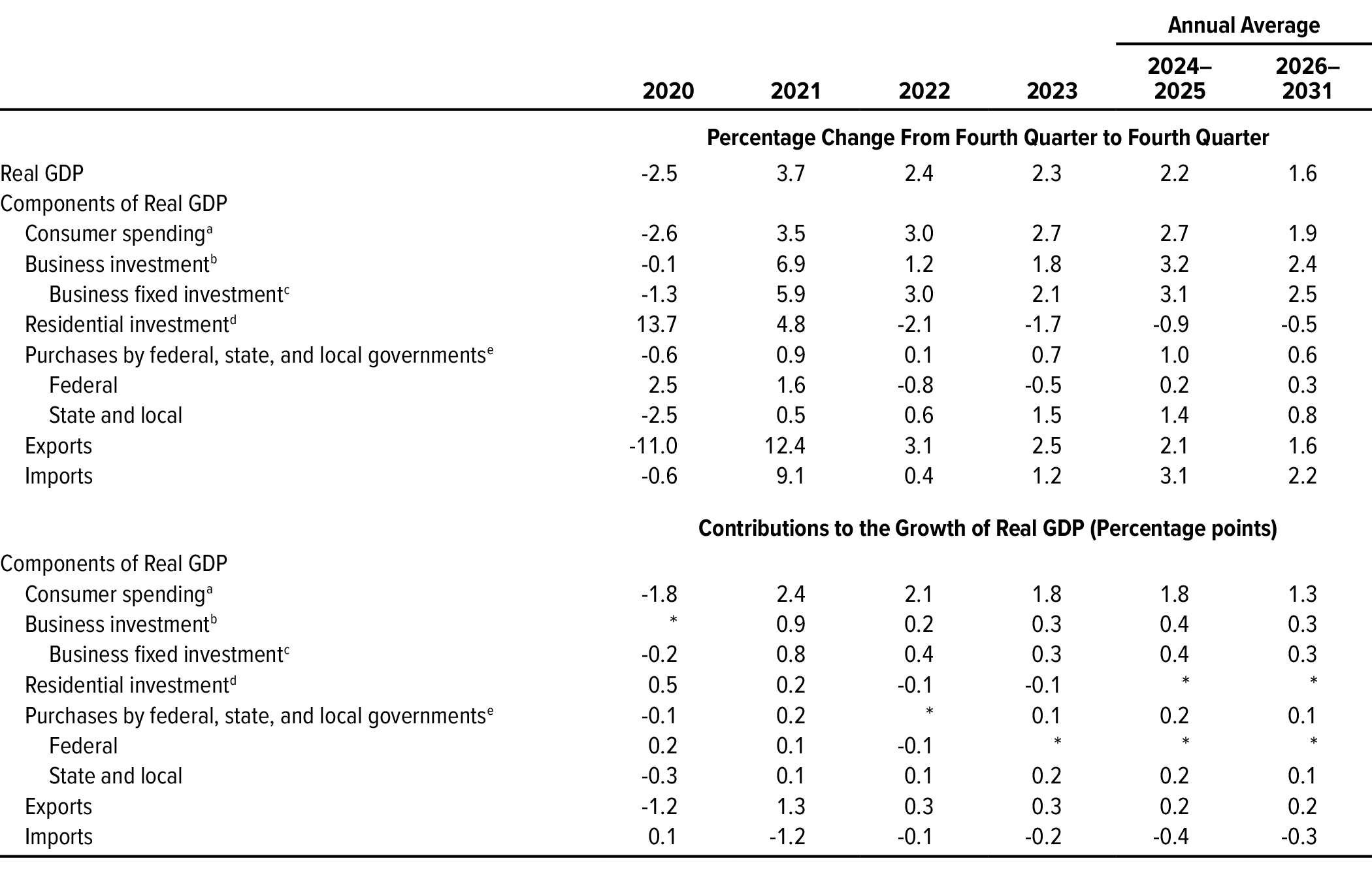 Real values are nominal values that have been adjusted to remove the effects of changes in prices.

a. Consists of personal consumption expenditures.

d. Includes the construction of single-family and multifamily structures, manufactured homes, and dormitories; spending on home improvements; and brokers’ commissions and other ownership transfer costs.

e. Based on the national income and product accounts. 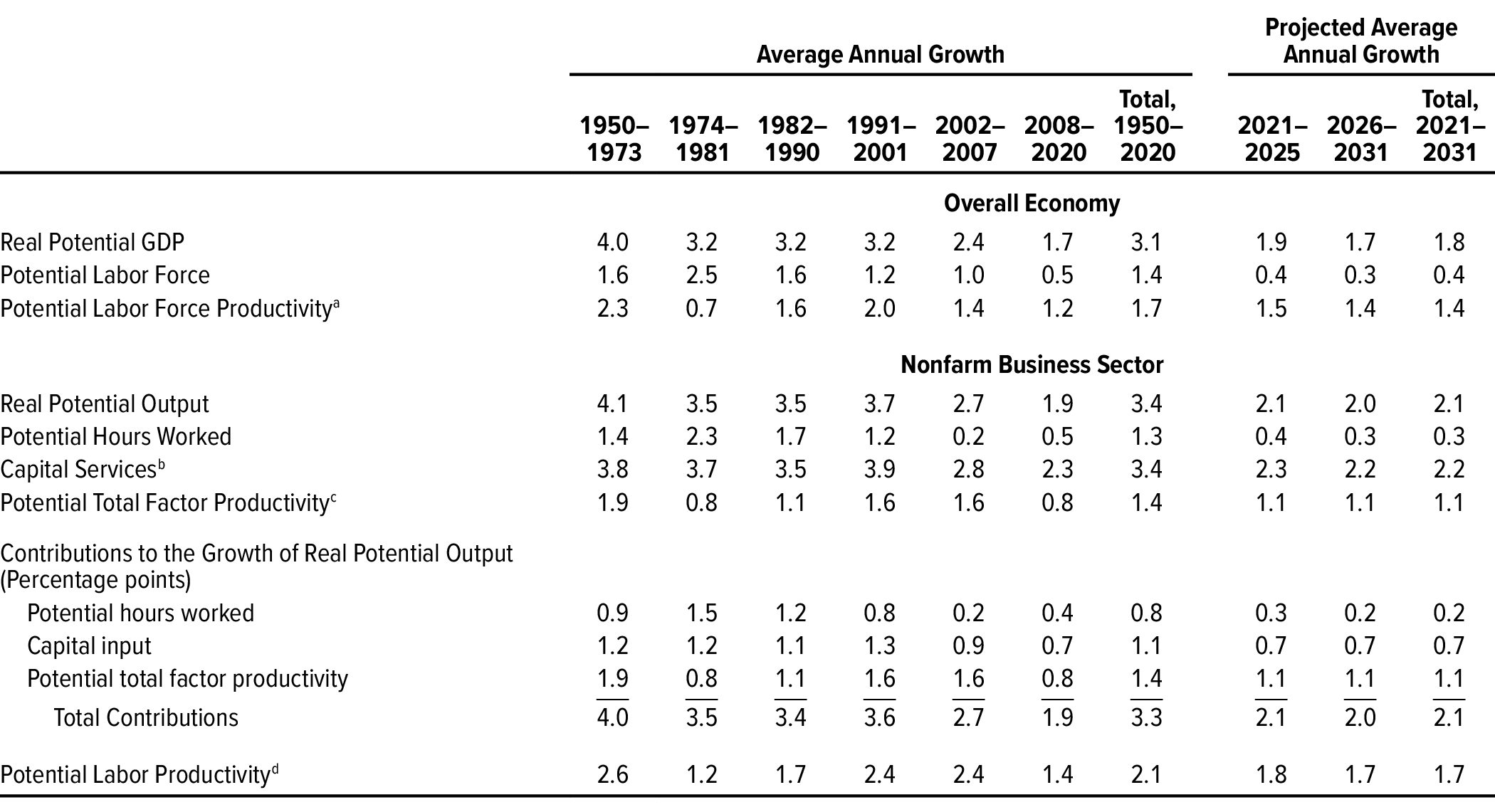 Real values are nominal values that have been adjusted to remove the effects of changes in prices. Potential GDP is CBO’s estimate of the maximum sustainable output of the economy.

a. The ratio of potential GDP to the potential labor force.

b. The services provided by capital goods (such as computers and other equipment) that constitute the actual input in the production process.

c. The average real output per unit of combined labor and capital services, excluding the effects of business cycles.

d. The ratio of potential output to potential hours worked in the nonfarm business sector.

Uncertainties in the Economic Outlook

CBO’s projections reflect an average of possible outcomes under current law. But these projections are subject to an unusually high degree of uncertainty, and that uncertainty stems from many sources, including the course of the pandemic, the effectiveness of monetary and fiscal policies, and the response of global financial markets to substantial increases in public deficits and debt. As a result, the economy could expand substantially more quickly or more slowly than CBO projects. Labor market conditions could likewise improve more quickly or slowly than projected, and inflation and interest rates could rise more rapidly or slowly as well. Also uncertain is the impact of the pandemic on the economy over the longer term, including its effects on productivity, the labor force, and technological innovation.

CBO currently projects a stronger economy than it did in July 2020, in large part because the downturn was not as severe as expected and because the first stage of the recovery took place sooner and was stronger than expected (see Table 4).4 GDP and employment are projected to be higher and to be accompanied by modestly higher inflation and higher interest rates than they were in CBO’s July projections. The fact that the downturn was less severe and the recovery stronger than previously projected also changed the projected pattern of growth: CBO’s current projections of GDP growth are stronger, on average, for the 2021–2025 period than they were in July but weaker for the 2026–2031 period. 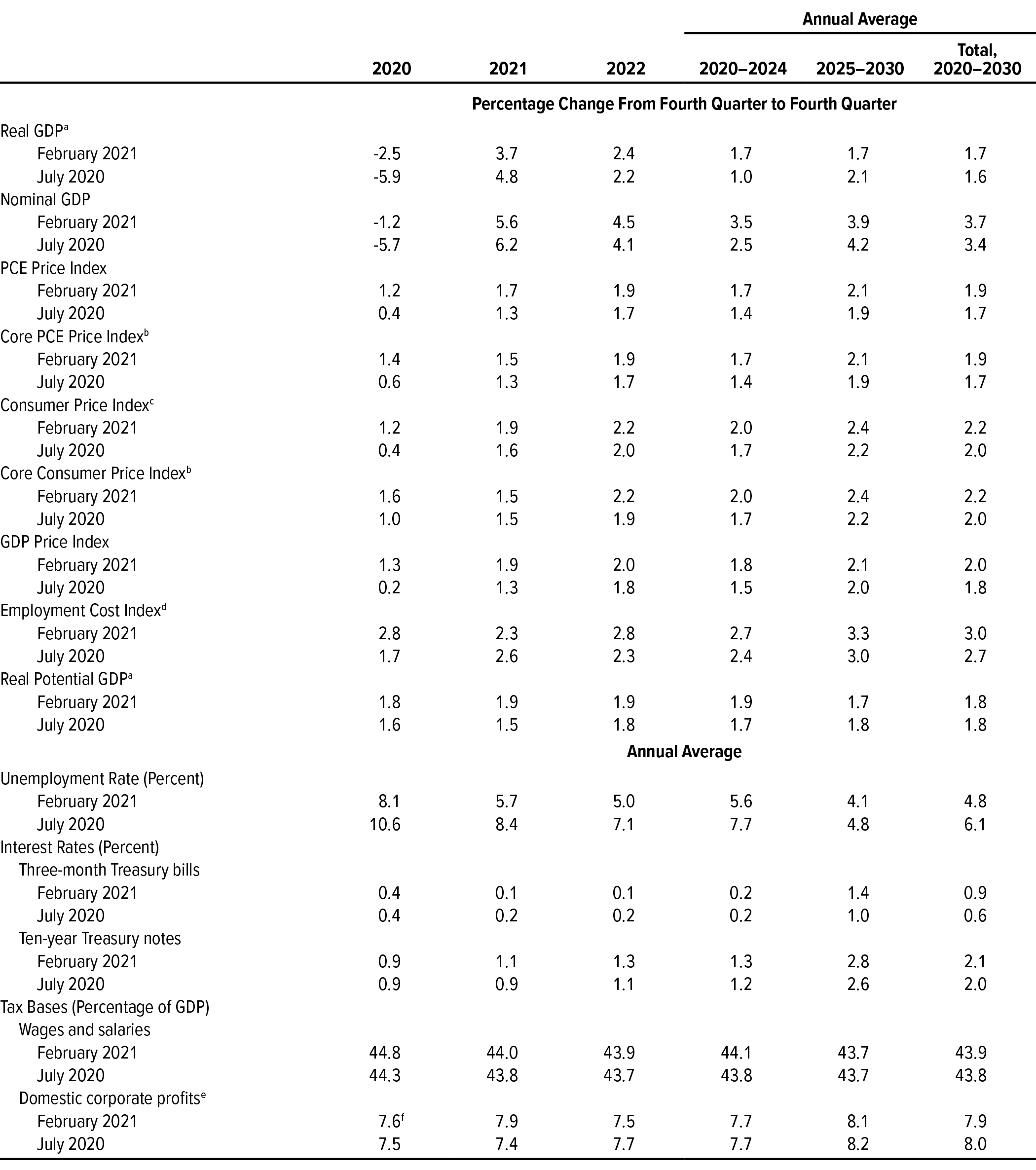 d. The employment cost index for wages and salaries of workers in private industry.

e. Adjusted to remove distortions in depreciation allowances caused by tax rules and to exclude the effects of changes in prices on the value of inventories.

CBO made those changes to its economic projections even though it expects social distancing to be more pronounced and to last longer than projected in July. The projected effects of the Consolidated Appropriations Act, 2021, played a part in improving the economic outlook.

1. The labor force is the number of people age 16 or older in the civilian noninstitutionalized population who have jobs or who are available for work and are actively seeking jobs.

3. Those provisions are contained in divisions M, N, and EE of the Consolidated Appropriations Act, 2021.

This document is one of a series of reports on the state of the economy that the Congressional Budget Office issues each year. In keeping with CBO’s mandate to provide objective, impartial analysis, this report makes no recommendations.

CBO consulted with members of its Panel of Economic Advisers during the development of this report. Although those advisers provided considerable assistance, they are not responsible for the contents of this report.

Mark Doms, Jeffrey Kling, and Robert Sunshine reviewed the report. Benjamin Plotinsky was the editor, and Casey Labrack was the graphics editor. The report is available on CBO’s website (www.cbo.gov/publication/56965).

The Congressional Budget Office has corrected this report since its original publication. Both the PDF and online versions were corrected, but for ease of reference, this list indicates the locations of the corrections in the PDF.

The following changes were made on February 9, 2021: