Unless this report indicates otherwise, all years referred to are calendar years. Numbers in the text and tables may not add up to totals because of rounding. Supplemental data are posted on the Congressional Budget Office’s website (www.cbo.gov/publication/­56442). On July 22, CBO will post additional supplemental material that discusses details of this forecast, including the components of the projected growth of gross domestic product (GDP), key inputs in CBO’s projections of potential GDP, and comparisons with previous projections and with those of other forecasters. Later this summer, the agency will produce a report examining the effects that federal policies adopted in response to the pandemic and recession are expected to have on economic outcomes.

This report presents the baseline economic forecast that the Congressional Budget Office is using as the basis for updating its budget projections for 2020 to 2030. The agency currently plans to release those budget projections later this summer.

This economic forecast provides CBO’s first complete set of economic projections through 2030 since January and incorporates information available as of June 26.1 The baseline forecast is being published now, rather than later with the budget projections, to provide the Congress with CBO’s current assessment of the economic outlook in a rapidly evolving environment. This economic forecast updates the interim forecast that CBO published in May, which focused on 2020 and 2021.2 It is similar to the May forecast for those two years, except that the projection of growth in the second half of 2020 has been revised downward.

The 2020 coronavirus pandemic has brought about widespread economic disruption. To mitigate the contagion, governments, businesses, and households in the United States and around the world have taken measures to limit in-person interactions. Collectively referred to as social distancing, those measures include reducing social activities and travel, curtailing the activity of schools and business, and working from home. In the first quarter of 2020, the pandemic and associated social distancing ended the longest economic expansion and triggered the deepest downturn in output and employment since World War II.

CBO projects that if current laws governing federal taxes and spending generally remain in place, the economy will grow rapidly during the third quarter of this year.

Following that initial rapid recovery, the economy continues to expand in CBO’s projections, but it does so at a more moderate rate that is similar to the pace of expansion over the past decade:

CBO’s projections reflect an average of possible outcomes. For example, the pace projected for the initial rapid recovery could continue until GDP returned to its potential, or the economy could grow much more slowly. The projections are subject to an unusually high degree of uncertainty, which stems from many sources, including incomplete knowledge about how the pandemic will unfold, how effective monetary and fiscal policy will be, and how global financial markets will respond to the substantial increases in public deficits and debt.

One major driver of CBO’s forecast of the economy for the next several years is the agency’s projections about how the pandemic and social distancing will unfold. CBO projects that the degree of social distancing will decline by about two-thirds from its April 2020 peak during the second half of this year, leading to an increase in social activities and commerce. That projection is in the middle of the distribution of possible outcomes, in CBO’s assessment. It allows for regional and seasonal variation, and it accounts for the possibility of multiple waves of increased transmission of the virus and retightening of social distancing measures, as well as other steps people might take to protect their health while engaging in economic activity.

Another major factor underlying the economic forecast is the agency’s projections of the economic effects of the four laws enacted in March and April to address the public health emergency and to directly assist affected households, businesses, and state and local governments. Those laws—which together are projected to increase the federal deficit by $2.2 trillion in fiscal year 2020 and by $0.6 trillion in 2021—will, in CBO’s assessment, partially mitigate the deterioration in economic conditions and help spur the recovery.

Growth of Real GDP and Real Potential GDP, and the Output Gap 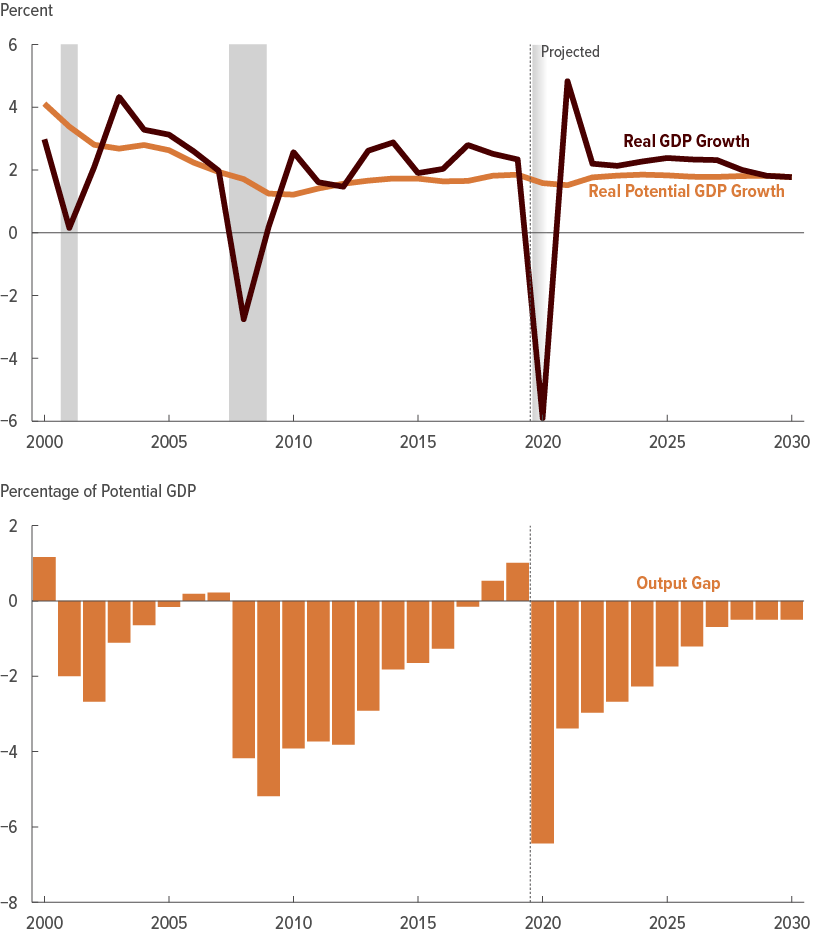 In the second quarter of 2020, the coronavirus pandemic and associated social distancing triggered a sharp contraction in output, ending the longest economic expansion since World War II. In CBO’s projections, real GDP grows rapidly in the second half of 2020 and the first half of 2021. Strong GDP growth continues thereafter but at a slower pace.

The shaded vertical bars indicate periods of recession, which extend from the peak of a business cycle to its trough. The National Bureau of Economic Research (NBER) has determined that an expansion ended and a recession began in February 2020. Although the NBER has not yet identified the end of that recession, CBO estimates that it ended in the second quarter of 2020.

Low-income families have borne the brunt of the economic crisis, partly because the hardest-hit industries employ low-wage workers. African American, Hispanic, and female workers have been hit particularly hard, in part because they make up a disproportionate share of the workforce in certain industries with jobs that involve elevated risks of exposure to the coronavirus. Although the labor market is expected to improve, in CBO’s projections, the unemployment rate remains higher through 2030 than it was before the pandemic.

Inflation, as measured by the growth rate of the price index for personal consumption expenditures (PCE), is projected to be 0.4 percent in 2020 and to nearly reach 2.0 percent—the Federal Reserve’s long-run objective for inflation—by 2024. CBO expects the Federal Reserve to keep its target for the federal funds rate (the interest rate that financial institutions charge each other for overnight loans of their monetary reserves) at 0.1 percent throughout that period. In CBO’s projections, the interest rate on 10-year Treasury notes gradually rises from an average of 0.9 percent in 2020 to 1.6 percent by 2024.

The economy continues to expand during the second half of the decade in CBO’s projections. Output grows at an average annual rate of 2.1 percent over the 2025–2030 period—faster than the 1.8 percent average annual growth of potential output. The unemployment rate continues to drift downward, reaching 4.4 percent by the end of 2030. Inflation is stable during the 2025–2030 period. For example, PCE price inflation averages 1.9 percent, close to the Federal Reserve’s long-term objective of 2 percent. Interest rates are higher in the second half of the projection period than in the first: From 2025 to 2030, the federal funds rate averages 1.1 percent; the rate on 3-month Treasury bills, 1.0 percent; and the rate on 10-year Treasury notes, 2.6 percent. Labor income as a share of GDP averages 58.1 percent, which is low compared with its historical average and reflects trends that were under way before the pandemic.

Uncertainties in the Economic Outlook

Like the interim projections that CBO published in May, the agency’s latest economic projections are surrounded by an unusually high degree of uncertainty. Some of that uncertainty results from the nature of the pandemic and the behavioral and policy responses intended to contain its spread. The severity and duration of the pandemic are subject to significant uncertainty. In particular, several important epidemiological characteristics of the corona­virus remain unclear: Much still needs to be learned about its transmissibility and lethality and about the immunity conferred on people who have recovered from it. Moreover, the severity and duration of the pandemic will be affected by how various mitigation measures reduce the spread of the virus and by when vaccines and additional treatments become available—outcomes that remain highly uncertain. Further uncertainty surrounds the effects of the pandemic and social distancing on economic activity and on the pace of economic recovery.

In addition, it is not clear how individuals, businesses, and state and local governments will respond to recent fiscal and monetary policy actions taken by the federal government. International conditions may also change in unanticipated ways as the pandemic works its way through the rest of the world. A further contributor to the overall uncertainty is that the speed and intensity of the recent downturn have greatly increased the difficulty of recording and compiling reliable economic data; CBO’s projections are based on data that may later be substantially revised.

The agency’s longer-run projections reflect the additional uncertainty of the underlying trends of key variables, such as the size of the potential labor force, the average number of labor hours per worker, capital investment, and productivity. Another source of uncertainty is the global economy’s longer-term response to the substantial increases in public deficits and debt that are occurring as governments spend significant amounts to attempt to mitigate the impact of the pandemic and the economic downturn.

Overall, CBO’s projections for 2020 and 2021 are similar to those it published in May, except that economic growth in the second half of 2020 is now projected to be slower. The economic outlook for 2020 to 2030 has deteriorated significantly since the agency last published its full baseline economic projections in January. For instance, the annual unemployment rate averages 6.1 percent over those 11 years in the current projections, whereas it averaged 4.2 percent in the January projections. Similarly, the annual level of real GDP in those years is now projected to be 3.4 percent lower, on average, than it was projected to be in January. Forthcoming supplemental materials will provide more detailed comparisons of the current projections with the agency’s previous projections and with those of other forecasters.

This document is one of a series of reports on the state of the economy that the Congressional Budget Office issues each year. In keeping with CBO’s mandate to provide objective, impartial analysis, this report makes no recommendations.

CBO consulted with members of its Panel of Economic Advisers during the development of this report. Although CBO’s outside advisers provided considerable assistance, they are not responsible for the contents of this report.

Mark Doms, Jeffrey Kling, and Robert Sunshine reviewed the report. Bo Peery was the editor, and Casey Labrack was the graphics editor. An electronic version is available on CBO’s website (www.cbo.gov/publication/56442).